Tasting and eating are important methods for my research, and I’ve made sure that eating oysters forms a part of my research on climate change and oyster farming on Cape Cod for BU’s Pardee Center for the Study of the Longer-Range Future.

That fieldwork continued this week at a team effort oyster tasting with another Pardee fellow, post-doc, and faculty fellow.  We hopped across the street to the Island Creek Oyster Bar and ordered a dozen oysters, four each of three oysters, and as we ate we collaborated on tasting notes.  But before I get to the notes, I encourage you to read this poem: “Oysters” by Anne Sexton, which we also used as a prelude our tasting. 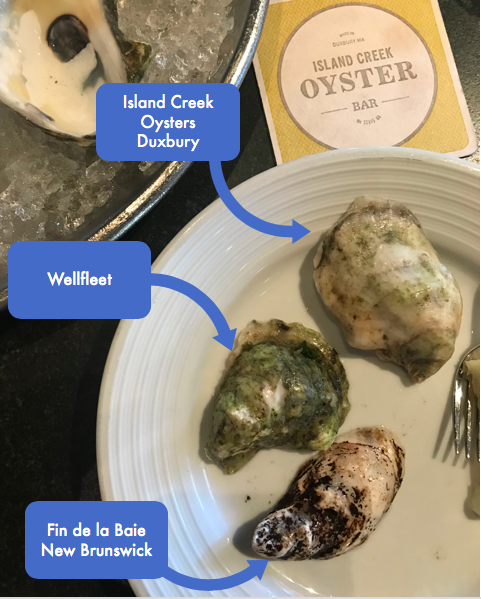 We started local with the “house” oyster – Island Creek is vertically integrated from  hatchery to restaurant – and with the warmest water oyster. Grown off the South Shore of Massachusetts in the waters of Duxbury, these oysters were also our largest of the flight.  We sniffed and sipped before we slurped, and agreed the nose was rounded and briny. One, two, three chews and we tasted mushroom, seaweed, and miso with a creamy, pillowy texture.

The most famous oysters of Massachusetts, these are grown on the outer Cape in slightly colder water.  In this case, the oyster’s brand name is the waters it’s grown in: the bays of the town of Wellfleet.  This oyster was much fruitier than the Island Creek, with an abrasive start and lingering finish.  One taster said this oyster gave him intense nostalgia for his days living on an oyster boat in his youth.

This tiny, delicate shell held an oyster that packed a punch.  Those cold Canadian waters gave this oyster a very different ‘merroir’ (like terroir, the taste of a place, but for the ocean).  When we smelled the oyster before we ate it, we agreed the brine’s overall scent was primarily (now don’t laugh) “wet rock.”  In tasting this oyster, I was struck by how sweet it was, with a nutty cashew flavor as well.

What can an oyster do?

In our post-prandial discussion, we considered if and how oyster eating could connect diners to the land and waters of Cape Cod.  Could eating oysters get Cape Codders or visitors to care about climate change? We didn’t come to any firm conclusions, but perhaps oysters could be a means of beginning the discussion for those who are more open to oysters than to talk of climate change.